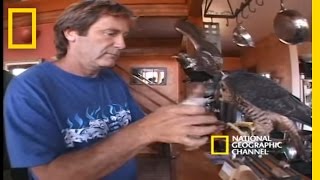 The Peregrine falcon: fastest animal in the world

We’ve all been told the cheetah is the fastest animal in the world, right? In truth, these cats have nothing on the Peregrine falcon, which is capable of reaching speeds of almost 250 miles per hour during its high-speed dive for prey, which is called a “stoop.” This video, which comes straight from National Geographic’s official YouTube channel, follows a team of experts who go to great lengths (and very high altitudes) to officially clock a stooping falcon. In the process,

Yesterday, CNN published an editorial written by Christopher Boyce discussing NSA whistleblower Edward Snowden’s recent acceptance of political asylum in Russia. In an article that calls out Vladimir Putin’s government for the alleged murder of dissenting journalists, the jailing of performance artists, and the criminalization of homosexuality, Chris makes the argument that Russia is precisely where the United States government wants Snowden – if not in their custody. The fol

Freeing 17 inmates is not prison reform

Watch: The time Cold War spy Christopher Boyce (AKA The Falcon) was interviewed in prison

The Falcon and Goliath, or: The Indie E-book that Could

Praise for "American Sons: The Untold Story of the Falcon and the Snowman"